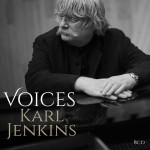 The world première recording ‘The Healer’ has just been released on Karl Jenkins’ new album ‘Voices’, for Warner Classics. In May 2016 we will tour the work in concerts at The Royal Festival Hall, Manchester Bridgewater Hall, and Birmingham Symphony Hall.

One of the world’s most popular and performed living composers, Sir Karl Jenkins is acclaimed for his diverse, innovative and inclusive scores – works rooted in the classical tradition but which draw on ethnic instruments and techniques to striking effect. From the award-winning Adiemus to the world premiere recording of The Healer, this special set traces Jenkins’s choral career to date, bringing together some of his most celebrated compositions – all of which are united by a harmony of peace guaranteed to appeal to music lovers of all stylistic and spiritual backgrounds.